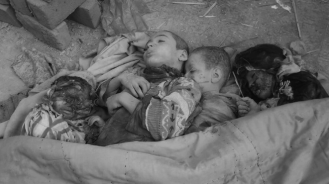 During Vietnam, a large percentage of Americans were strongly against America’s campaign in the war. Those who weren’t fall into two categories: 1.) People who were afraid due to falling victim to the Anti-Communist campaign launched by the America’s wealthy elite capitalists & profiteers controlling government and needing for Americans to view anything which isn’t profiteering and lining the pockets of America’s Oligarch class as “evil”; and 2.) Those with star-spangled eyes who think America can do no wrong, and everyone in the world needs to become American because America is just the best, and war is always justified, in the way that Superman always is.

The latter eventually grew to become the former, anyway.

In either case, both groups belong to the Conservative class in American society, what now falls under the Republican or GOP party today. This group views themselves as more American or more “patriotic” than other Americans, and views anything not in line with the massive corporate agenda of the ruling oligarchy as dissent and views opponents as being Anti-American.

This group is comprised of the millions of minions which became fodder of the anti-Communist campaigns spread by the Elites to satiate their endless Capitalist Greed.

4 million students protested the Vietnam war, completely shutting down most of the Universities in America, vehemently against Nixon, America’s President, and the Evil Capitalist War Profiteering Machine. We can assume the Ivy League schools were not among them, as they’re educated to learn to take advantage of the general population for massive profits and to always set their own self-interests above all else in society, society be damned.

That was America during the Vietnam era, people who cared about the American Soldiers dying continually for no good reason, and America’s unabashed evil in invading and bombing the bejeezus out of neutral & innocent Cambodia, themselves no real friends of Vietnam, thus giving rise to Pol Pot & the Khmer Rouge, which made Hitler & the Nazis look like schoolgirls. But, hey, to most American’s, particularly the Conservative ones, they’re all just “Orientals”, to put it as nicely as they’re able.

We got into Vietnam simply to make war against people who aren’t interested in personal corporate greed and profits. In essence, we took our nearly 200 years of non-stop war experience where we did whatever lined the pockets of our warmongers, and said to Russia “hey, you think you’re going to stop us from profiteering now? Let us show you what kind of power us greedy capitalists actually wield here, which our citizens mostly have no knowledge of”

And then Russia said “ok, then fight my war robot with custom chainsaws in the war ring down there”

And Americans rolled up their sleeves and jumped into the ring bare-fisted fighting Russian robots, dying miserably, and killing some robots too, whilst the Russian were in the luxury penthouse suite overlooking the ring filled with dead American bodies, polishing their Fabergé Eggs and enjoying their Beluga Caviar, and the rest of the Russians at home tucked safely into bed, like the obviously more intelligent people they are.

And there were, of course, an elite group of American Oligarchs in an adjacent Penthouse suite, telling more American soldiers to just keep jumping in the ring, whilst lining their pockets so they, too, might have their own Fabergé Eggs, and who would also occasionally step into the Russian suite to enjoy a toast of Dom Perignon and perhaps a frolic with some attractive milky white Russian girls.

The wealthiest people in the most advanced nation on earth thought it acceptable to make war with the poorest people and one of the most impoverished nations on earth. This is clearly the wealthy using a the poor to build more wealth by creating wars with people most Americans wouldn’t think mattered.

Though the world saw Vietnam as a massively atrocious failure, to those profiting from the war, those very architects of the war, it was a huge success as all wars for them are. America thus eagerly jumps into wars with poor non-European people because they can get away with it, largely because of American Racism & Bigotry, because they are hugely profitable, win or lose, all lives be damned. They continually get away with murdering the poorest people on earth because Americans believe that any war is a war where you root for your side, rather than the zero sum dystopia itis, where everyone loses everything, except for the war mongering profiteers of death.

Fast forward to today, and we have large swaths of Americans, even those in many colleges, vehemently & violently against, not the war, but anyone who is against the war. The masses of minions which worship the flag, blindly, and call for anyone against the American president, which really started with Bush Sr., then Bush Jr, and now Trump (who some may categorize as an American President, rather than a Russian spy), and the War Machine to be themselves attacked, have now become the loudest voices in America.

To be certain, much of their sentiments stem from simply wanting to do whatever it takes to support a president who will put white Americans first, again. Their attacks are growing and becoming more and more toxic and hate-filled towards American citizens who are trying to make the world a better & safer place for all.

As we did in Cambodia, after 9/11 we immediately just made war with a completely unrelated country, a country who was no real friend of Afghanistan (itself not responsible for the actions of a few radicals), for money, for oil, for corporate profits, and the wealth of the American Oligarchy, under the guise of playing Superman.

The major difference here is that those protesting the war were very small in number compared with those supporting a random unrelated war on a random unrelated country. But hey, to most American’s, particularly the Conservative ones, they’re all just “ragheads”, to put it as nicely as they’re able.

We even just took the leader of that unrelated country, the only leader to hold the region together in most of recorded history, and marched him up on a platform and hung him by the neck on live television for the whole world to see what we’re really all about. That, of course, led immediately to more war and more enemies and a nice & tidy continuation of the perpetual war our War Capitalists need to keep funneling America’s money into their own profits, and directly to the military and their private contractors and corporate war technology builders & schemers. The very public, very heavily broadcast hanging of Saddam Hussein was their warning to the world: “The Capitalist American War Machine IS America, and to any who oppose us, we can freely march into your country, wherever you are, and hang you by the neck in your pajamas on live television for the world to see. All your Resource are Belong to us!”

We continually show the world we are not afraid to murder people for decades, overthrow governments, and topple democratically elected leaderships, if you aren’t going to play ball and allow us to profit and have our hands deep in your pies. The world knows the American people will stand by their leadership, as they murder untold millions, so that an elite few Americans can live a life of incomparable decadence. Americans will take to social media and hate you and your country if you have free health care, free education, or a high and livable standard of living, or in any way try to infringe upon the powers of Capitalist Profit-mongers who will not be inhibited in their exploitative endeavors by you or anyone else, upon consequence of Death by Hanging.

Money that is not going for education, health care, nor any American need whatsoever, and is keeping every other other American institution just barely operable, and putting all of our money into war, which mostly just benefits very few companies. It essentially does what nearly every Capitalist ideal to enter our government is designed to do, funnel money straight from our government and tax payers directly into the pockets of that elite fraternity shoving all of our money down each others pants and laughing about it.

These architects of death & mayhem have also carefully constructed the infrastructure that has armed to the teeth their blindly ignorant minions brought up to defend this profit-lust debauchery and their other shenanigans.

They no long need the National Guard to Shoot and murder Liberal student anti-greed protesters, like they did in Ohio at Kent State University, and at Mississippi State University, & at the University of New Mexico during the Vietnam War, they’ll now just have their fanatical lunatic radical supporters do it for them.

There have been over 53,000 American casualties of War since the Gulf War, with no end in site, there are more every day. America has been in a war, and usually multiple wars, nearly every single year since America was created in 1776 in the middle of another war. Should you really be a country if you have to fight every single other country on Earth?

Should you go to school if you have to fight every single other kid in the school?

If everywhere you go you’re getting into fights and battles and wars with every different kind of people on the planet, at what point do you stop blaming other people and just admit you’re the only asshole with a problem?

But of course this isn’t an inability to get along, it’s unfathomable greed, vying for power and dominance, bullying, threatening, stealing, murdering, and just anything you can do to keep spending all the money on wars, the spoils of which go to the highest bidder.

And Russia, still very obviously much more intelligent than the Americans, toys with the American government at the highest levels, keeping their safe distance from the jokers & clowns and useful idiots they have panting at their pant cuffs, and the Americans, bafflingly, still stand in solidarity with the racist dude promising them more whiteness.

And we are getting continually pushed into wars and closer and closer to the brink of massive Nuclear War with very powerful, highly unamused & unafraid Nuclear World Powers, by these same greedy, corrupt, debauched, delinquent, morally broken capitalist oligarchs locked away in their compounds, never to feel the effects of war, and only looking to the next dollar that can be made, free from scrutiny, protected by our own government which they’ve paid handsomely for.

We won’t protest, we have our soothing phones and social media to coddle us. Our society has shifted to one of vitriolic hate, spite, and disgust towards our own citizens and has allowed the Capitalist Oligarchy to unleash their unfettered reign of death & terror over the world’s populace for mere corporate profits.

And they have an army of armed trigger-happy, hyper-sensitive, twitchy Conservatives to enforce their will and secure their dominance & position.

And it’s not just the Nixon nose-bleed-induced Baby-boomers, it’s, saddest of all, even the very spirit of American youth, as young as 14 or younger, with their hearts and brains switched off and ready to take you down for trying to put a stop to this disgraceful unsanctionable debacle that is America today.