There seems to be quite a common misconception confusing unseasoned Carbon Steel for Seasoned, I’d like to try and clear this up and give a comprehensive understanding of Carbon Steel.

Carbon Steel is prone to rust easier than probably any other form Steel & Iron around.

It is manufactured, then immediately coated with Paraffin or Beeswax etc. to prevent it from rusting.

Once you get it home and want to use it, you have to burn that off (I recommend burning it off rather than scrubbing it off, anyway)

You need to immediately coat it with oil and heat it and begin the seasoning process.

The Instructions only give you a starter suggestion on how to not become frustrated and quit using Carbon Steel, by just telling you to put some oil and make it hot.

That is just oiling & heating the pan, and I suppose can technically be termed a type of “Seasoning” of metal, in the broadest sense, similar to how you could wipe cast iron with a bit of oil and heat it up and call it technically “seasoned” in that at least it isn’t going to rust.

But you certainly wouldn’t call that a seasoned cast-iron skillet. Likewise, your carbon steel is not a seasoned pan until it has been well-seasoned and becomes non-stick through the development of a heavy patina.

Here are some examples of extremely beautiful Carbon Steel and Cast Iron pans. You could be forgiven for wanting to keep them looking that beautiful.

However, all of those pans, Cast-Iron and Carbon Steel alike, will be completely Black once they are actually working properly, and while that does seem like a loss of such a beautiful appearance, it is how they MUST be used, and that makes them all the more beautiful, as the true beauty is in their use.

Here are some examples of what your Carbon Steel should look like: 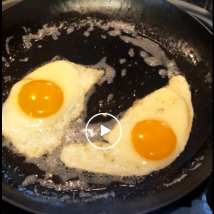 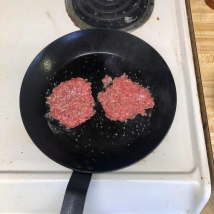 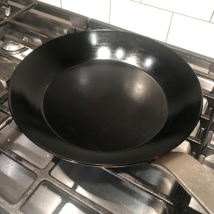 And this is what your carbon steel should not look like: 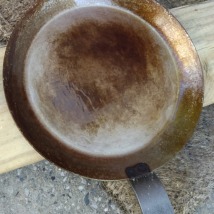 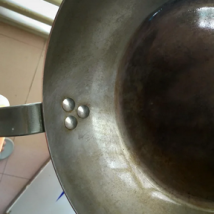 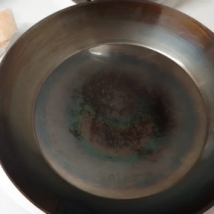 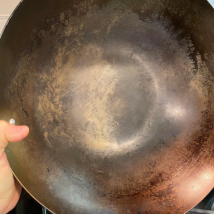 These are all still a long way from being Seasoned.

Nobody should feel bad for not having properly-seasoned pans. Carbon Steel is really only appreciated and used by the most expert of Chefs and Enthusiasts, and Information is not readily available, and it’s not something even easily done at home in your kitchen just by trying it yourself without knowing the end result.

We all started out now knowing anything about them, and I’ve seen them used incorrectly in some professional Kitchens, even. And often people just get too busy too keep up with the seasoning, or new chefs come in who don’t know about them and they get used with less and less seasoning, until they look like an Aluminum Pan with black stuff stuck on the edges.

So, I this post is meant to help strengthen the community of Carbon Steel pan users, and help us all reach our pans’ full potential, and help get everyone on the same page we can all get our pans properly seasoned.

If you’re just starting out or want something easier to season, I recommend starting with Black Carbon Steel, which is already naturally pre-seasoned with oil during the High-heat production process. Something like This BK Black Carbon Steel Pan is an excellent choice, which will continue getting darker and developing a thicker patina with continued proper care and use.

Woks are the hardest to season, because it needs the sides to be heated which usually requires a Wok Ring and multi-Ring Wok Burner, that puts out a tremendous amount of flame.  But can be don’t by carefully holding it with a hot pad or folded rag or oven mitt and you rotate it on its side over an electric burner, or a propane tank & portable wok burner outdoors.

Paella Pans can be a little tricky as well, as their size is much larger than your burner, so you have to move them around quite a bit.

And without a good gas stove you almost surely have to hold your pan sideways over the electric burner over high heat.

And if your wok has wooded handles etc, those need to be unscrewed and removed before seasoning.

And sometimes a built in handle on a Wok or bigger pan is just too awkward or in the way to get it down on the burner properly, and so you may end up with a slight dip in your seasoning around the handle area, and that’s ok.

And it can produce a lot of smoke, so you need a strong hood, or opened windows, probably a fan as well.

The easiest way is to get an inexpensive Wok Burner and hook it up to a portable Propane tank and do it outdoors in your yard or a park where you’re allowed to BBQ, or an open garage etc.

Do’s and Dont’s of Cast Iron:
Use of Carbon steel is much like the use of Cast-iron. It’s not an all around pan that can be used for anything. It keeps its seasoning less than cast-iron and its loss is far more perceptible.

There are people who really do things in Cast-Iron which they shouldn’t be doing, and which is destroying and stripping the patina, and filling their food with harmful amounts of metals.

You can strip ALL of the seasoning off the Carbon Steel in one cooking if you’re using it for things it shouldn’t be used for.

However, ONLY with a thick patina can get away with adding liquid and simmering in Carbon Steel AND Cast-Iron, and only for very short amounts of time.

Without that patina, you are just leaching metals into your food, stripping what little seasoning you had, and introducing rusting into your food, really exactly like Cast-Iron.

With the Patina, you can use it properly as a chef would, for Non-stick cooking, and be free to de-glaze and lightly simmer your pan sauce etc without destroying the patina or revealing bare metal.

Simmering can be done briefly, but is weakening & stripping your patina. But Only with a thick Patina can it be done.

Properly, with Cast-Iron or Carbon Steel, you’ll want to use your pan for pan searing & sauteing, then transfer that to a Stainless Steel, Enamel-Coated Cast-Iron, Ceramic Stove-top Cookware, Glassware etc, to simmer your food item for longer periods or with higher volumes of liquid.

Liquids for sauces are almost so minute as to appear completely dry in the pan, and any sauces made in the wok are thickened immediately and simmer for less than a minute, and the thickened sauce also has a volume of oil in it.

Things cooked for longer periods of time are deep fried or Pan Fried in the wok, with Oil being ladled over it during cooking. It’s then removed from the wok and other things are sauteed over heat that is so high as to cause any liquid to dissipate as it’s released. A small amount of liquid is added and immediately thickened and the fried ingredients are re-introduced and it’s tossed and removed from heat, a small amount of liquid is added and swirled briefly, a Bamboo wok brush can be used to swipe it clean, sideways, not by poking the patina, then it’s dumped out and wiped clean and dry and returned to heat and oiled lightly, heated for the next dish, and more oil added for cooking.

As for Paella Cooking in Carbon Steel pans, Simmering liquid is added to the well-oiled ingredients, the dish is tended to carefully on the stove without scraping the bottom metal, until quite thickened, which happens in a rather short period, and it is them covered and place in the oven or left on very low heat.

A lot of Paella pans not taken very good care of will appear rusty along the sides. This is a very old technique that leaches harmful metals into the food, and is usually done incorrectly, as a Paella pan is the pride and joy of any restaurant serving a proper Paella, and is cared for more than any other pan in the kitchen.

But many Carbon Steel and Cast-iron pans are just used by many people improperly, and they will all argue that it is fine, and that’s up to them, and they may choose to simply oil raw carbon steel and use that exclusively, but there is no benefit to using such a pan that wouldn’t be exponentially increased through proper technique and seasoning, and being combined with other pans using proper procedures.  And there is no non-stick benefit to such a pan, either, and the healthiness of cooking with such pans is highly questionable, and arguably less healthy than something like Teflon, even.

Lower-quality Carbon Steel won’t hold it’s patina as well. As for what the pilgrims did or life back in the Iron-Age, I’m sure long-simmering in Iron pots was commonplace, but so were many things we now know to be unhealthy